Those sage words from DayBreaker yoga teacher Michelle DiMillo define the Daybreaker experience – a deep yoga session followed by two hours of the best dancing in the city. And the most unique feature of all? It starts at 6 in the morning.

Yes, you read right. The start time for the Daybreaker experience is a very early 6am. When I arrive at 5:50am at the door to The Commons, the space in which Daybreaker has made its new home, there is already a lineup and the event is sold out. At 6am.

I am a new recruit to Daybreaker. As a nightclubber of many years and now a mom of two young kids, I have missed dancing. Not just any dancing but the ecstatic dancing that comes with being in a space with amazing music and a crowd lost in that music. For me, inverting the day to be part of that dance experience again makes sense and is something I am more than willing to explore.

Daybreaker’s values embrace mindfulness, wellness, mischief, self expression and camraderi. This seems to be a big draw for many, judging by the predawn lineup of people waiting to stake out their space for the yoga session. Many of them are new to DayBreaker. They heard of the event through a friend or online and decided it was worth investigating. Word of mouth is definitely the lifeblood of this gathering.

As we wait in the dark, two cheerful men haul in speakers and shortly after, a happy male-female duo greet us and invite us up. They are incredible cheerful for this hour in the morning. We are greeted by more cheerful volunteers who quickly check for us on the list and welcome us in. We have arrived.

The Commons is a wide open space that Daybreaker has made its own. Lighting shifts the room colour every minute or so, from awakening red to peaceful purple to verdant green. A simple stage has been set up with a DJ table and there are star-shaped silver balloons tethered to the floor. The atmosphere is a combination of peaceful yoga studio and a nightclub waiting for its crowd to arrive.

The room fills quickly with yoga participants, including a crew of what clearly are veteran Daybreakers. You can spot them by the Burning Man styled outfits and their open smiles. Within a few moments, Michelle begins the yoga session, supported by some delicious beats from the DJ. It is a potent cocktail this early. There is a sense of both reverence and amazing energy, enhanced by the dark of the early morning.

The group of sixty yogis move silently through the poses, as the lights shift and the beats ground us. A shirtless man with a beautiful script tattoo running down his spine moves next to another man in loose dance gear, next to a woman who I would expect to see in my suburban yoga studio. At least a third of the group is men (a pleasant surprise) and the crowd ranges from early twenties to sixties and beyond, which isn’t surprising considered the wide reach of yoga. It is the feel of the session that is sets it apart. These are people who take their yoga seriously, no slackers and no judgement, and the rising good energy in the room makes me think that more dance clubs should open to morning yoga. 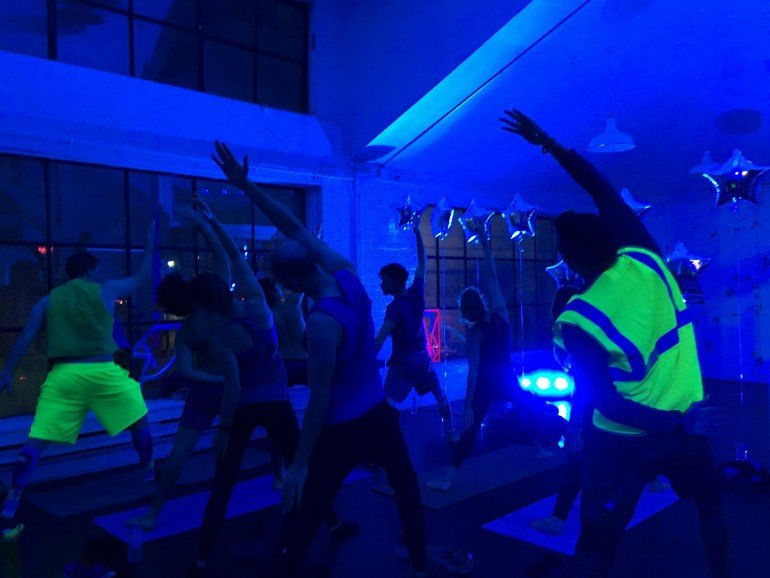 By the time Michelle ends the yoga sessions with her Namaste call to action, the temperature of the room has risen to hot. The space begins to morph as the lineup of 7:00a.m. dancers flow into the space. Suddenly, we are shifting to celebration, Daybreaker style.

The dancers are given a few minutes to get their bearings and then the volume of the music rises. Neil Martin, MC of the morning and one of the producers of Daybreaker in Toronto, steps up to the stage and welcomes us to the space and we are off.

The music is loud and hypnotic and there is a strong core of dancers who are ready and willing to lead the dancing right away. They are not holding back and their energy is infectious. While some spectators hang back around the periphery, most people leap into action, encouraged by Neil’s front and centre dancing and his encouragement on the mike. 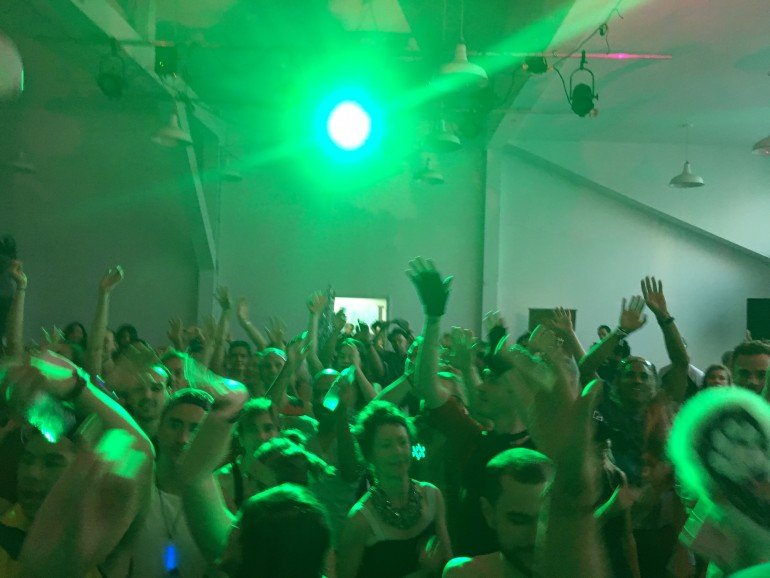 What I realize I am thinking about fifteen minutes into the dance is that I had not had this much dance fun in a long time. The veteran Daybreakers have shown up dressed to set the scene, fuzzy vests, flashing light hats, wolf ears and more. One man stands out, resplendent in a black body suit and an incredible black cone of feathers emerging from the top of his head, ratcheting up the celebratory atmosphere. And pretty much everyone is moving, and really moving. The feel is akin to 4:00a.m. at a really great club.

DJ Pashmina is clearly a man who understands morning people. He holds the space in the palm of his hand, the tempo hot and moving, shifting from giddy house to funky retro, all with a heartbeat that inspires all of us to stay on the dance floor. And his grin can be seen from every corner of the room.

This is how we greet the morning, dancing happily with whomever is passing by, smiling and hugging and dancing some more. The morning sun enters the windows of the Commons, adding a sense of wonder to the experience. There is a sense that this is more than just a party, that there is a magic in this space on this morning, as we let go and simply celebrate movement. Within the community, there is no sense of an inner and outer circle. The veterans Daybreakers spilt up and spread themselves around, helping to build the energy all over the dance floor.

More surprises beyond the early hour and the grooving crowd (over two hundred, easily) keep showing up. A trio of men armed with trombone, trumpet and sax appears on the stage and begin to jam with the music, much to the delight of the dancers. They start on the stage and then file right into the crowd, elevating the energy again as they snake through the dancers, jamming together and with the entire crowd. At another moment, a rope performer begins her graceful movements as the dancers circle around her to watch. She is gorgeous to watch and she provides another surprise that maintains the collective energy. 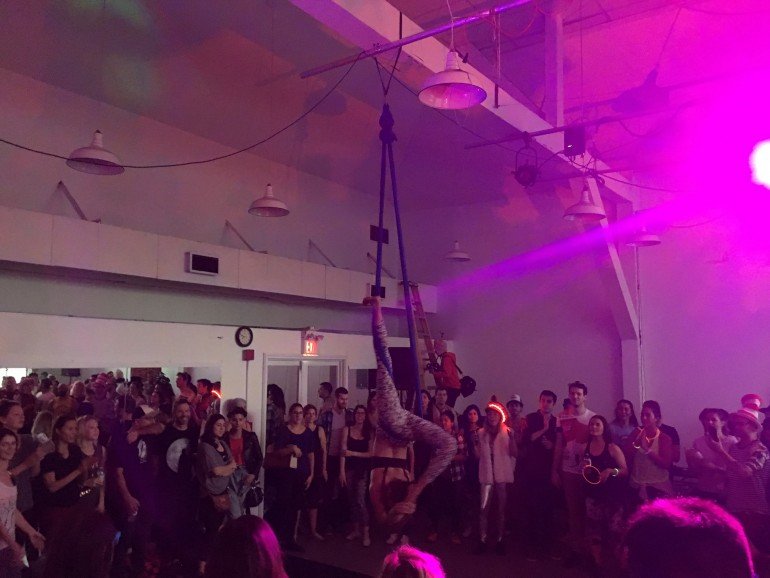 If it feels like things are ebbing at all, MC Neil is up on the stage in an instant, celebrating all of us for showing up, encouraging the DJ, leading the dance. He invites people onto the stage to dance with him, pulls up all the people with October birthdays to celebrate them and later, balloons are set free from the ceiling to add to the fun.

Taking all of this in are videographers from CBC New and CTV. The idea that this many people will gather this early to dance is a big media draw. They seem as surprised as us newbies that there is something with this much energy happening at this time in the morning. You can tell that the infectious positive energy of the crowd is rubbing off on them. Soon, they are grinning too as they capture the scene.

As the sun streams through the windows, the Daybreaker experience winds down. There is a hardcore group of close to a hundred still dancing and Neil of Project Spaces invites us to sit down. Mike Schram, a gifted spoken word poet, comes to the stage and graces the group with a beautiful offering that leaves everyone applauding. Then, Eli Clark-Davis, head of Business Development with Daybreaker based in NYC, he of the amazing black body costume, steps up to thank the group and brings in Daybreaker cofounder Rahdna Agrawal via phone. The delight coming from both of them for the Toronto gathering is delightful and the group mirrors it right back at them.

As a departure gift, Neil leads us in reading collectively from a card each of us has been given, entitled “Where will your journey take you?”, inviting us to practice kindness to ourselves on our life journey. Neil and co-producer Marianne Bulger then call on us to take the positivity we have created in the room out into the world with us. There are thanks extended to everyone who has contributed to creating the event and finally, it is time to depart. 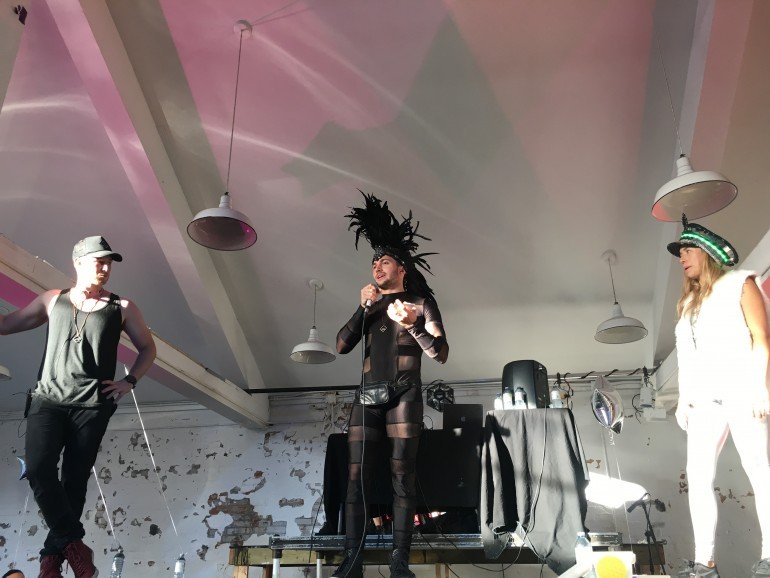 We emerge into the morning sun, surprising passersby, who look at us with curiosity, clearly wondering where we have been. It feels like we have been up to something secret and lovely, something worth doing again.

In a PM conversation after the event, Neil tells me that he first heard about Daybreaker while he was in San Francisco and months later, found himself and 600 happy people at Daybreaker NYC. He and Marianne were determined to bring the party to Toronto and with their third, co-producer Jeffrey Howard, they have made it happen. I am surprised to hear that the MC role is a stretch for him personally since he looks so incredible comfortable in the role. One of the benefits for Neil from his Daybreaker experience is being able to connect with people in a whole new way.

The bottom line – if you are seeking a great yoga class and some terrific dancing to start your day, come out to the next Daybreaker celebration. And you are seeking something more, a community and a generous serving of love, kindness and presence with your yoga and dance, come on out too. It is all there for the dancing.
All of that before 9am on a Wednesday morning. 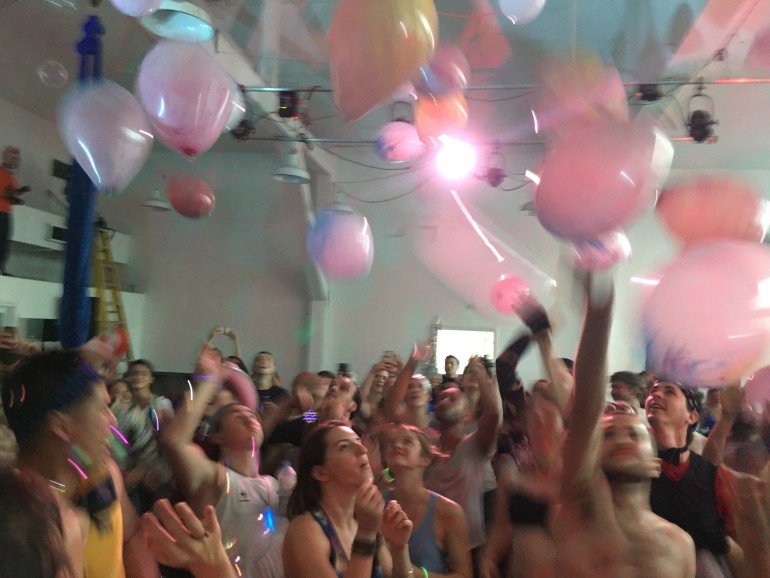 Lea Ann Mallet
Lea Ann Mallett is an activist, speaker, writer/photographer and purpose-fuelled coach who believes that we all have a unique purpose that can fuel our lives and work. When she is not working with her clients, she can be found wandering through the fields near her kids’ school and creating photoessays on the beauty of life in the wilds of suburbia.
PREVIOUS

What Makes a Great Dance Partner?

The Power of Dance and Its Impact on Mental Health